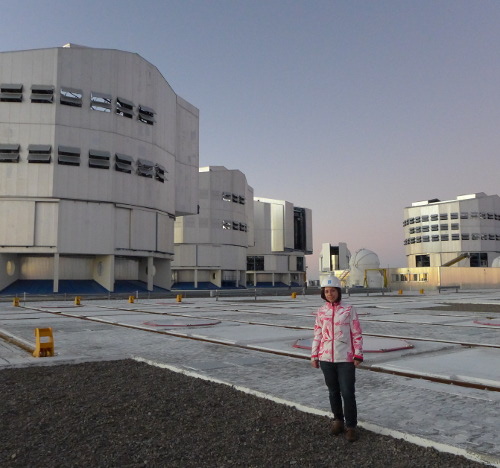 The stellar population in the Galactic Center

The Closest Look at young S-stars near the Black Hole

Within a distance of 0.04 pc from the the super massive black hole (SMBH) in the center of our Galaxy exists a group of young stars. Given how inhospitable the region is for star formation, their presence is more puzzling the younger we estimate their ages (Eisenhauer et al. 2005, Martins et al. 2008). It is highly unlikely that the young S-stars formed at their present location, since the SMBH’s tidal forces are too strong to allow star formation at these distances. With all the observational constraints and theoretical complexities the question of the origin and distribution of young stars in the GC has become one of the most remarkable issues in this field. 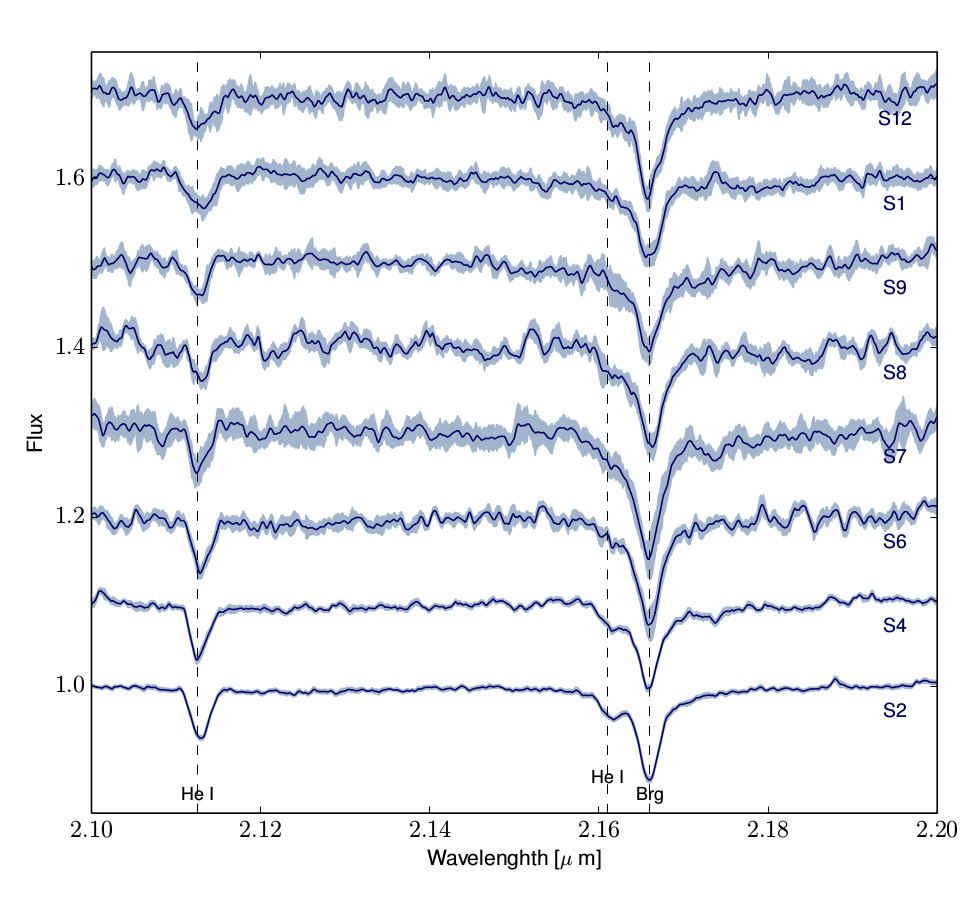 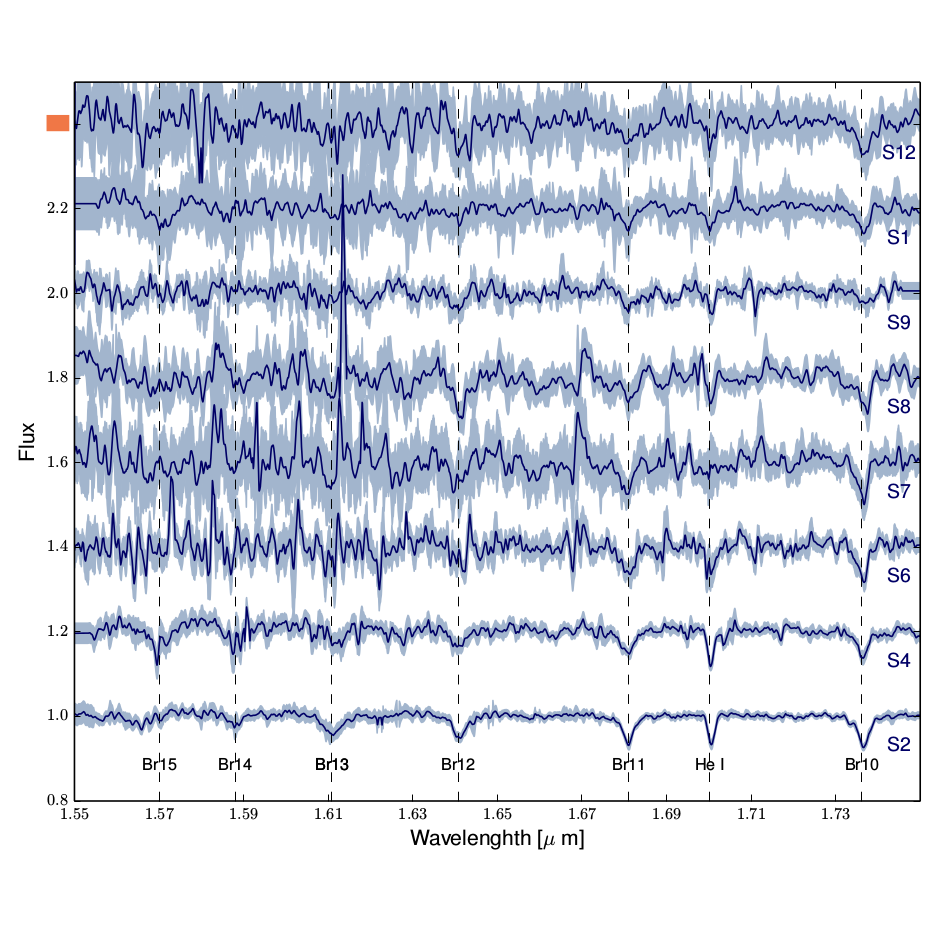 By co-adding up to 105 hr of spectra we have obtained high signal-to-noise H- and K-band spectra of eight brightest stars in the field orbiting the SMBH. The deep H- and K-band spectra of S2 (K-band S/N: 480 and H-bandS/N: 280), S4, and also combined spectrum of other fainter S-stars, disclose a clear Stark broadening in the Brackett lines that implies high surface gravity of S-stars. This finding is established by our detailed stellar atmospheric+evolutionary model analysis, which employs line profiles of the complete Brackett series(excellent indicators of gravity)in the H- and K-bands.

We derive an age of 6.6(+4.7- 3.4) Myr for S2. With higher uncertainties, we estimate the age range of the other studied S-stars to be less than 15 Myr. The relatively low ages for these S-stars favor a scenario in which the stars formed in a local disk rather than a field binary-disruption scenario that occurred over a longer period of time. Although the proposed scenarios so far show that a disk origin for S-stars is possible, it is unclear whether the necessary conditions predicted by different scenarios are fulfilled in the GC. 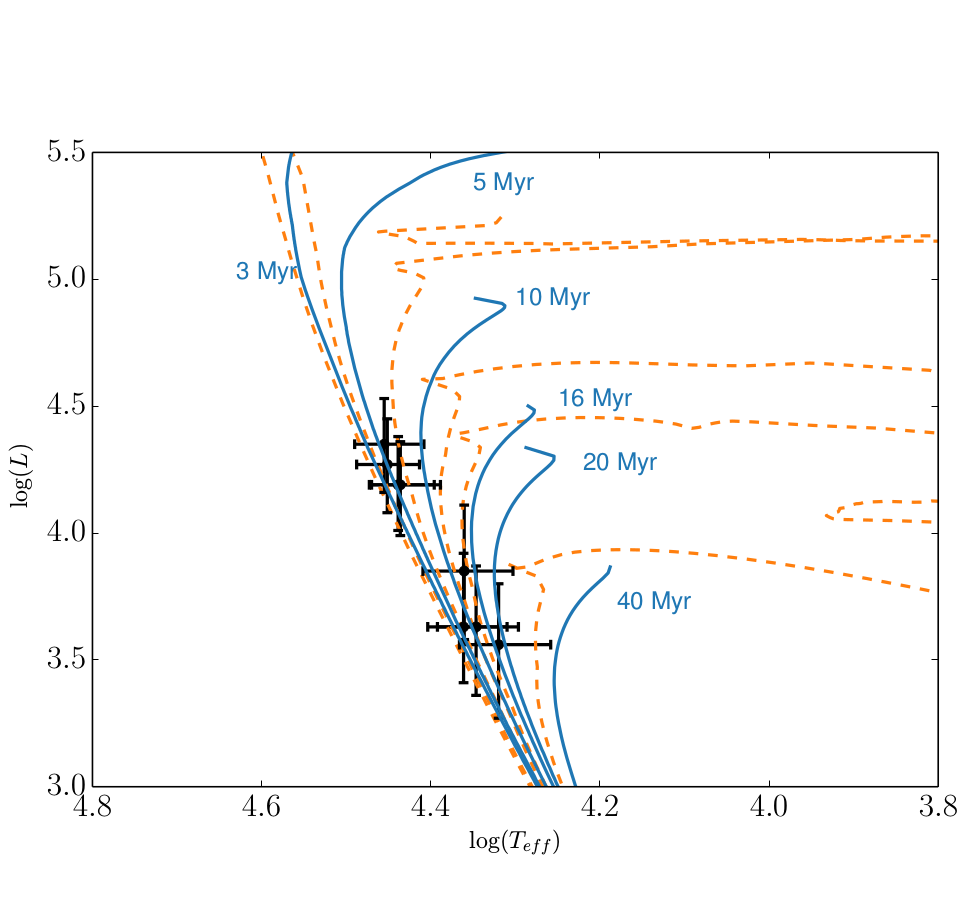 Theoretical stellar dynamics predicts the formation of a dense stellar cusp of old stars within a dynamically relaxed cluster around a massive black hole. Such a cusp has so far escaped unambiguous observational confirmation specially within the central 0.5 pc (Bartko et al. 2010). Due to the high extinction and extreme stellar crowding, Particularly the increasing density of young stars toward the center, it is observationally challenging to confirm whether or not a stellar cusp exists.

By co-adding spectroscopic observations taken over a decade, we identify new late-type stars within the central 0.2 pc of the Galaxy. The unique advantage of our spectroscopic study is that through an individual age estimation, we can select a stellar population that is old enough to have undergone dynamical relaxation. 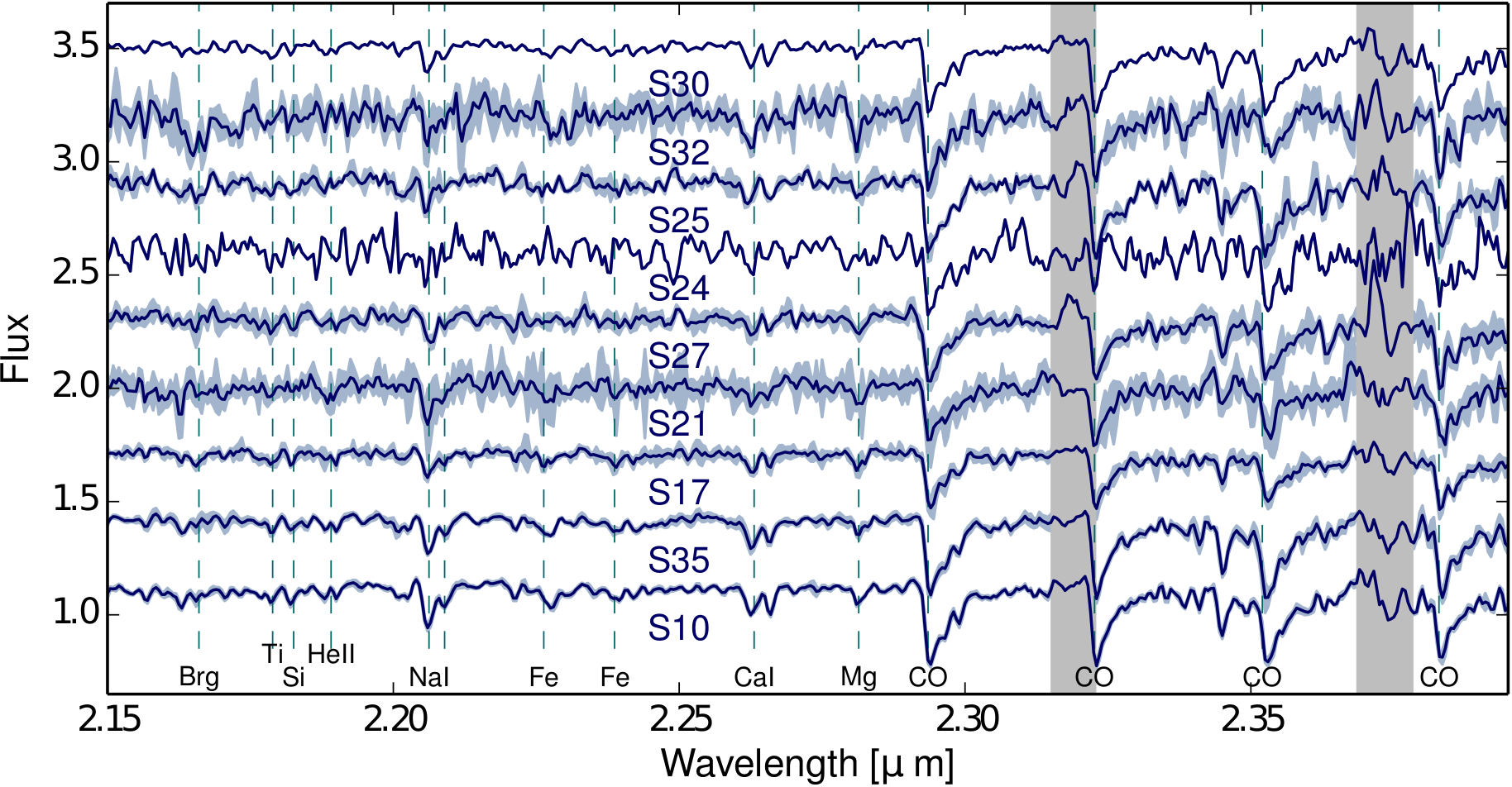 The updated star count, based on individual spectral classification, is used to reconstruct the surface density profile of giant stars. Our study, for the first time, finds a cusp in the surface number density of the spectroscopically identified old (>3 Gyr) giants population (mK<17) within 0.02-0.4 pc described by a single power law with an exponent Γ= 0.34 ± 0.04. 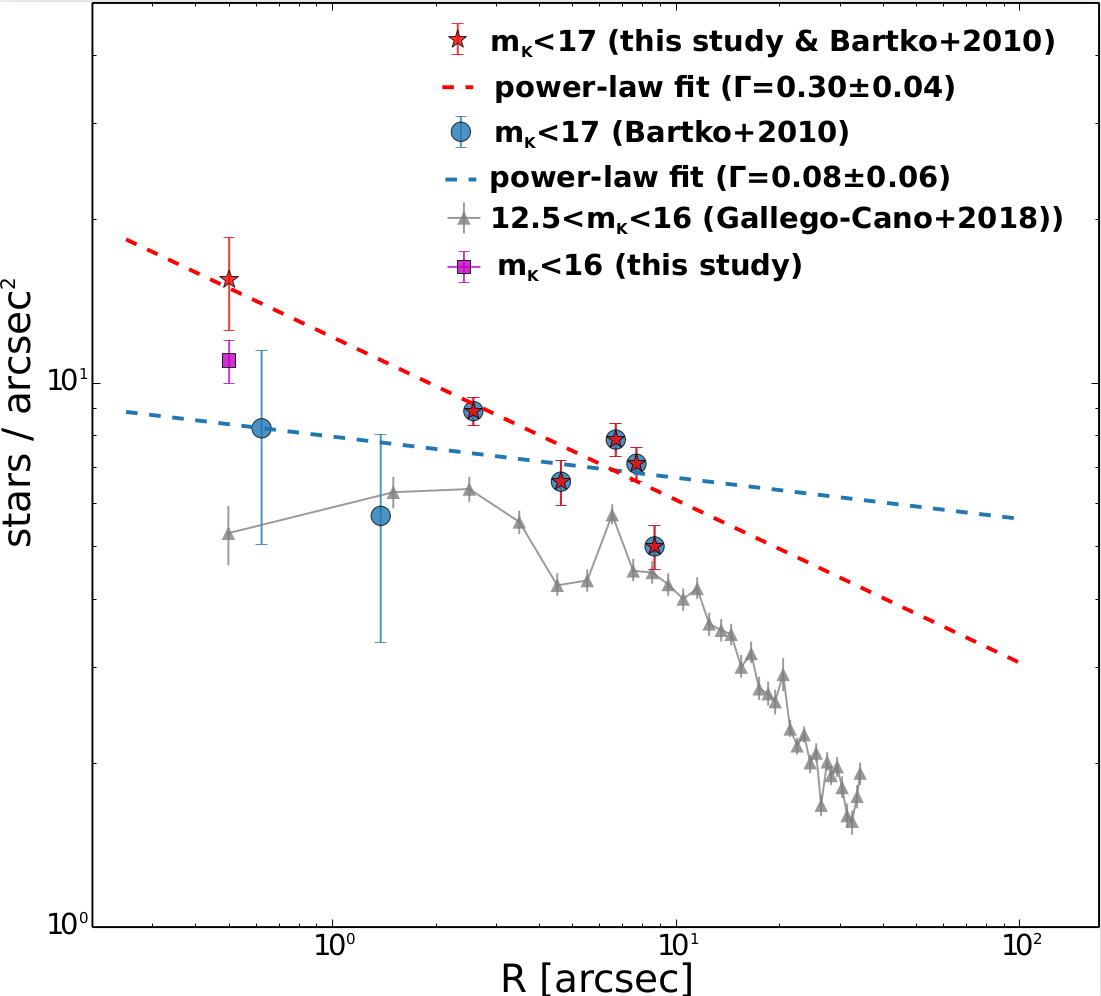 My research during the PhD project at the University of Bonn in collaboration with Dr. Andrea Stolte centered around the study of young, massive star clusters. I particularly worked on the Arches cluster which is located at a projected distance of 25pc from the Galactic center (GC) [7]. The GC is the most extreme star-forming environment in the Milky Way. It was suggested that the star formation process in this region gives rise to a top-heavy stellar mass function, forming a larger fraction of high mass stars than anywhere else in the Milky Way. The Arches cluster is the youngest among the three massive clusters in the GC, providing a collection of high-mass stars and a very dense core (ρ core ∼ 10 5 M  /pc3 , [1] ) which makes this cluster an excellent site to address questions about massive star formation, the stellar mass function and the dynamical evolution of massive clusters in the GC.

I analyzed high-resolution near-infrared adaptive optics data from VLT/NACO in combination with seeing- limited observations of the Arches cluster from Subaru to study the cluster out to its tidal radius for the first time. As a major part of my research on the GC star clusters, I studied the effects of the extinction law on the stellar mass function. I used a Bayesian method to obtain a realistic extinction map of the Arches cluster. Comparing the previously used ”standard” near-infrared extinction law with the steeper wavelength dependence suggested by new studies, I showed that a moderate change in the extinction law causes substantial changes in the derived stellar masses of up to 30%. A decrease of the individual masses of ∼ 30% changes our understanding of these clusters, specially as the Arches cluster was used to derive a possible upper-mass limit of M = 150M  for the star formation process in the Milky Way [2].

Dynamical contribution of the starburst clusters to their surrounding area

Our studies on the Arches cluster show that the GC clusters are dynamically evolved at younger ages due to their special environment. Therefore, we probed the contribution of drifted sources from the star clusters to the observed population of isolated massive stars in the GC. Recently more than 100 isolated Wolf-Rayet and OB stars have been identified in the GC which has triggered some discussion on their origin [6]. Our simulations illustrate that a considerable fraction of 67 − 100% of the isolated Wolf-Rayet stars and O supergiants in the GC most likely originate from the Arches and Quintuplet clusters (Fig. 2). The simulations indicate that sources as massive as 100M  can be drifted up to 70 pc from the cluster core during several periods of strong pull from the Galactic potential [4]. So we do not necessarily need high-mass star formation in isolation to explain all the observed Wolf-Rayet stars in the GC environment. This result, along with our observation of the Arches cluster that revealed a normal but dynamically evolved mass distribution, together provides an image of the GC as a region with normal star formation processes compared to the rest of the Milky Way.

(19) Detection of orbital motions near the last stable circular orbit of the massive black hole SgrA*, Gravity Collaboration including Habibi, M. , 2018, A & A, 618, L10

Teaching at the infrared station in the annual Girls' Day at MPE. This event gives girls the opportunity to gain insight into scientific studies and technical careers. Read about the next Girls' Day. 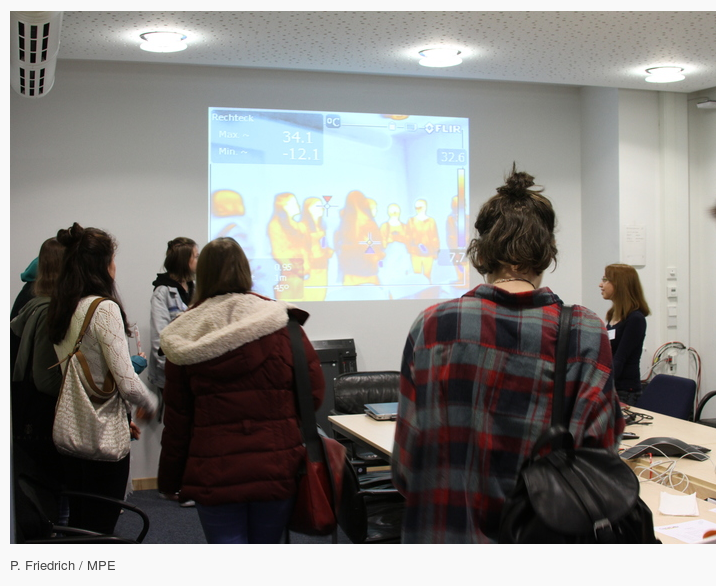 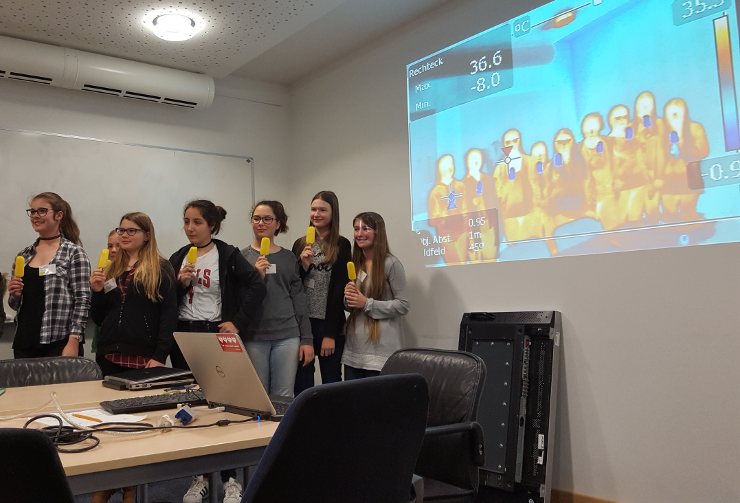 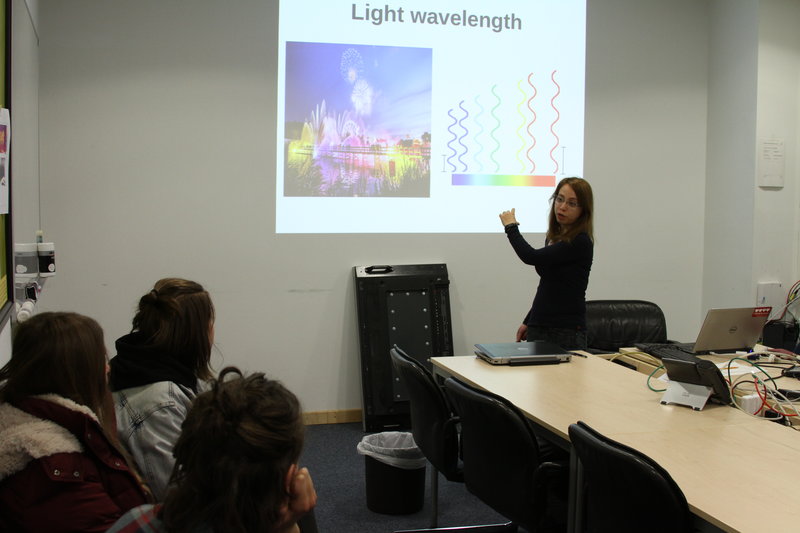 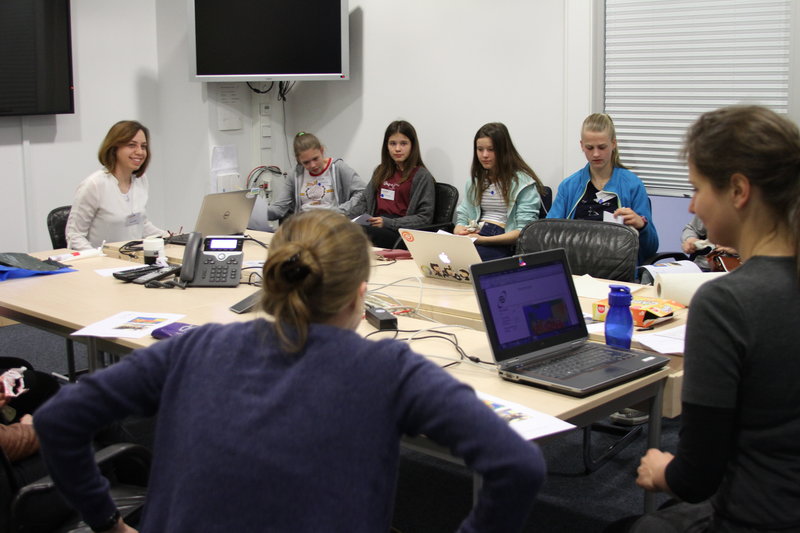 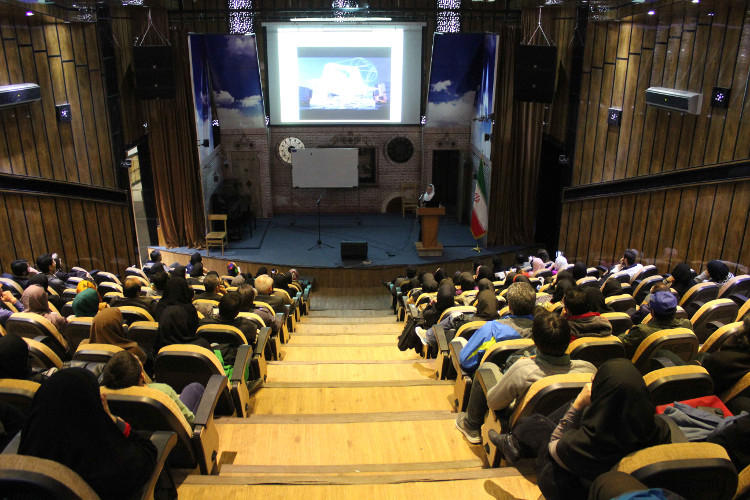 I have guided the visitors of the astronomical exhibition at ESO Supernova. The ESO Supernova Planetarium & Visitor Centre is a unique Centre for Astronomy Education and Outreach in Garching. 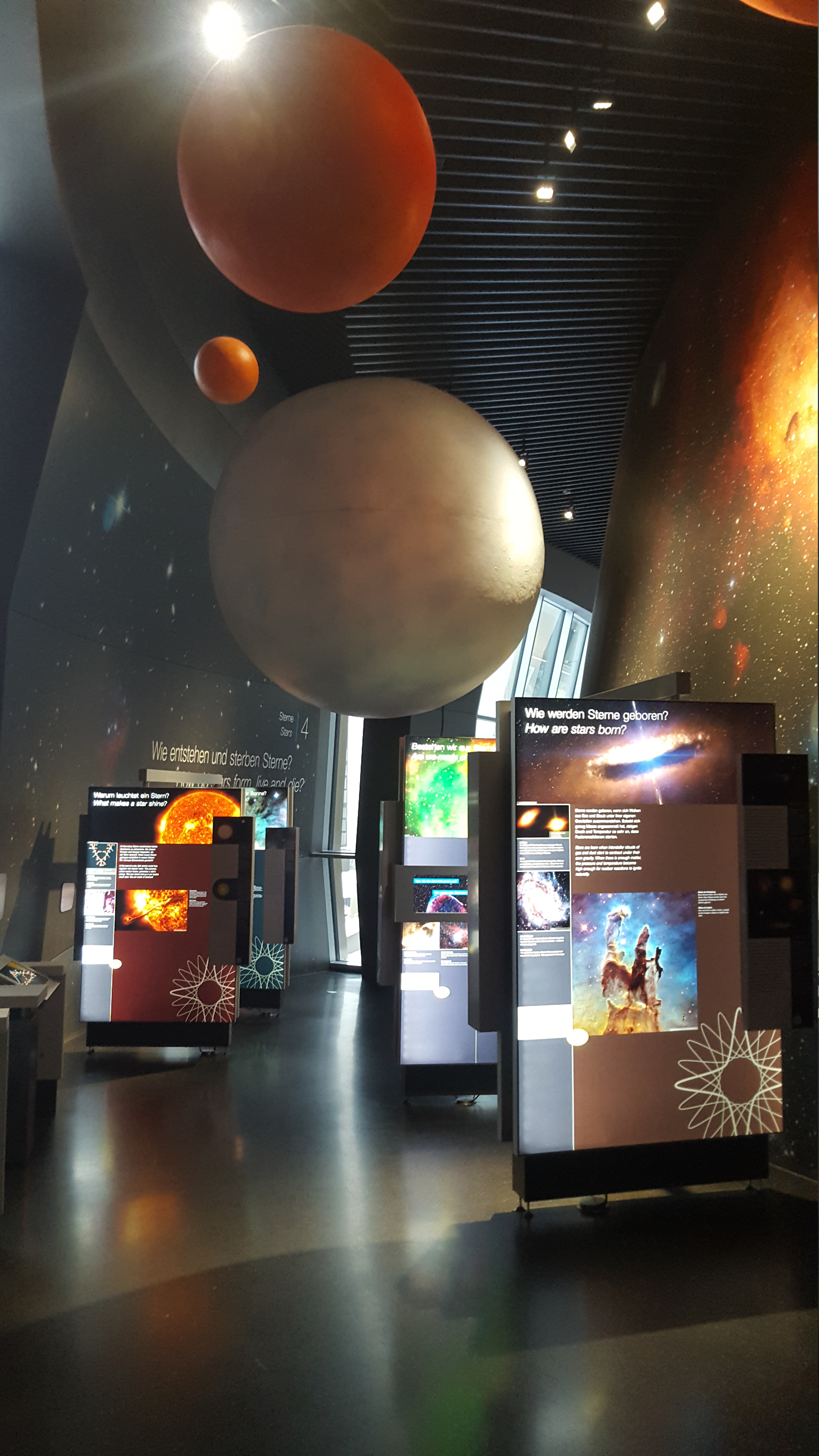 ِYou can read my article on the Staryab webpage in persian here.

Here you can read the news in Persian فارسی and a short interview with me on this topic. The following two videos are from the original press release by ESO.